Date Of Next Meeting: 19th April

The next meeting of the Scottish Lute and Early Guitar Society will be Saturday, 19th April, St Cecilia’s Hall, Cowgate, Edinburgh. Assemble from 1pm for a 1.30pm start. All welcome.

If you wish to make a presentation, please get in touch: robmackillop AT gmail dot com.

A fine meeting indeed! Good to see more new faces and a few guests. Thanks go, as ever, to the staff at St Cecilia’s Hall.

Rob MacKillop started proceedings again, and acted as MC throughout. First he presented a Turkish tanbur, which was a new (one day-old!) eBay acquisition for him. He gave a short talk about Ottoman music, with its many microtones, then proceeded to give a searching doodle on the C Major scale – you have to start somewhere! Hopefully Rob will perform a complete piece at the next meeting.

Next, Rob got out a ukulele, and gave a short presentation about the 19th-century machete from Madeira, itself a very small 4-string guitar. More about this instrument and its music on Rob’s website HERE. He gave a performance of the delightful Clara Polka from the manuscript of Drummond de Vasconcelos, Madeira, 1846.

Chris Jupp bravely used a borrowed lute (as one of his strings was at bursting point), but gave a fine performance of a really beautiful and interesting piece: a pavan, attributed in its manuscript to Anthony de Countie, who may have been one and the same as Anthony Holborne. I’d love to hear this piece again sometime, Chris. 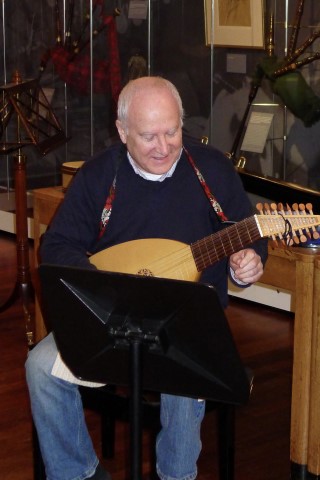 Next up was Stuart Mcluckie, who, playing a 7c lute, gave a good rendition of  ‘Rogero’ and ‘The Division of Rogero Before’ both from the
Dallis Manuscript (via The Lute Society’s ’58 very Easy Pieces’) and, by audience demand, Kemp’s Jig. Stuart plays well at every meeting, and I always look forward to hearing what he has been working on.

Bill Samson just seems to grow in confidence with each performance, due in some part to playing pieces below his level of ability – something we should all think about. What we just get through at home on a good day, is likely to fall apart under the pressure of performing to other players. No problems here with Bill, who not only played Galliard Les Cinq Pas and an Allemande by Guillaume Morlaye (1552), but did so on his own home-made 4c guitar – and it sounded beautiful! 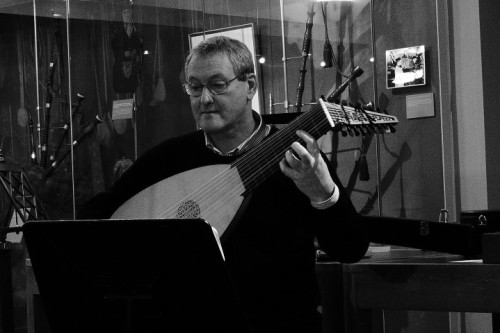 Graham Wylie gave an interesting and thoughtful introduction to two pieces by Robert Ballard on his 10c lute, placing the instrument at the crossroads between the dying embers of the Renaissance, and the birth of the baroque. Graham then performed A Courante, originally published I think in 1618, and Ballet number 9 from Ballard’s “Premier Livre” of 1612.

Eric Thomas was a new face to the society, but I’m sure he will become a familiar one. He got an exquisite, sweet tone from his Barber-Harris student lute. First he gave a ripping rendition of the Calata Ala Spagnola by Joan Ambrosio Dalza, then a thoughtful interpretation of Sir John Smith’s Almaine by someone called John Dowland…a fantastic piece! 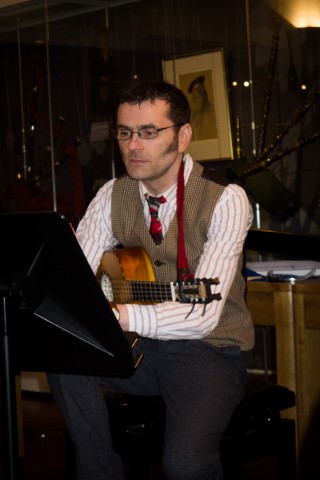 Gordon Ferries performed some really interesting and beautiful pieces on the 5c guitar: a suite in Bb Major by Francois Campion – written in an unusual scordatura. I’d love to hear it again, and hope it will form part of Gordon’s next recording.

After the playing, Bill Samson gave a very useful illustration of how to tie gut and nylon frets, using a dummy lute neck and a cigarette lighter – I was terrified the museum’s sprinkler system would burst into operation! Thankfully it didn’t. Thanks to Bill for making the effort. We are looking to the membership to put forward ideas for future talks. If you would like to make a presentation, contact Bill Samson or Philip Lord via the circular emails, or contact me – robmackillop AT gmail.com.

Much discussion in huddles followed, as ever, and continued long after this reviewer had time to stay.

The above photos were by Stuart Goldie. The ones below, by Bill Samson. 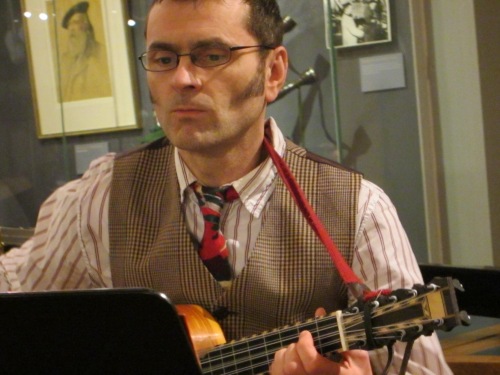 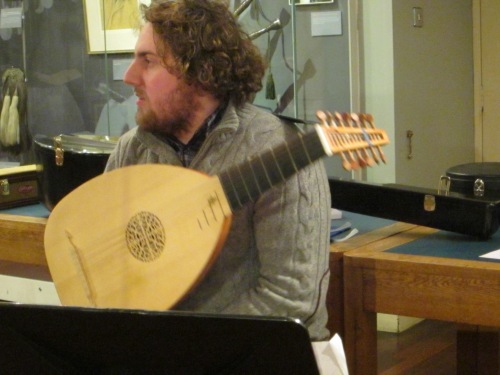 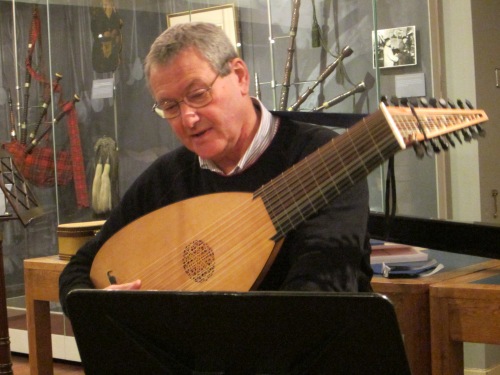 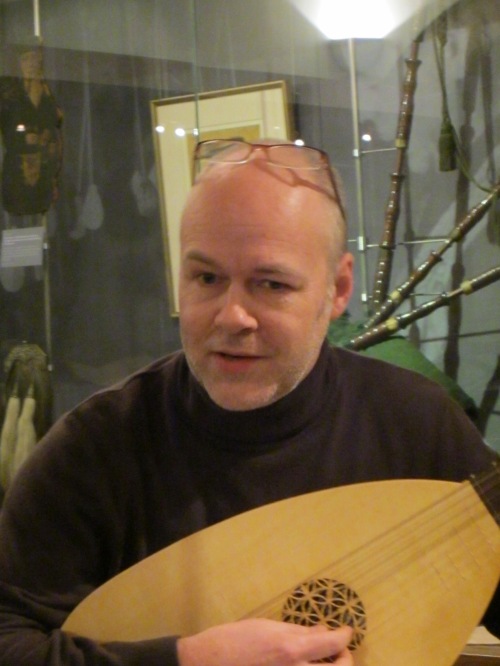 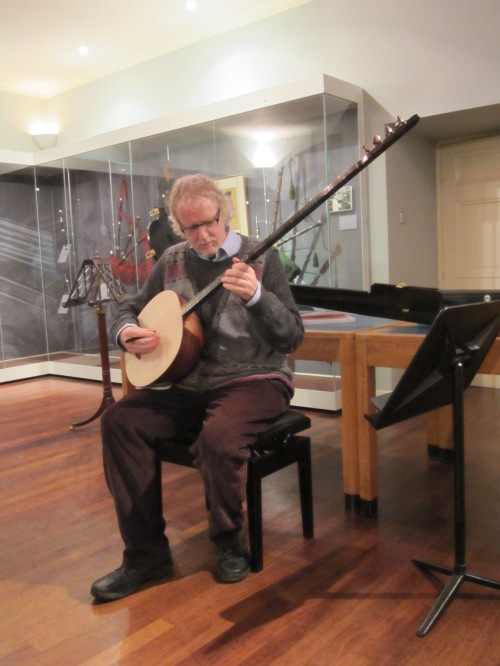 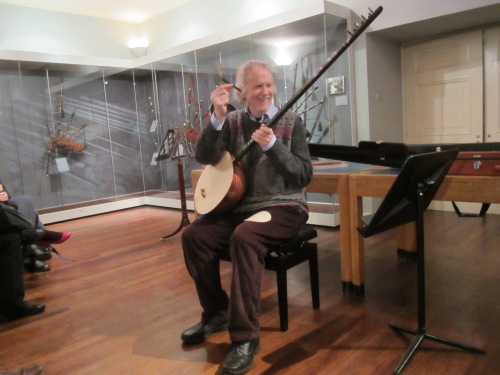 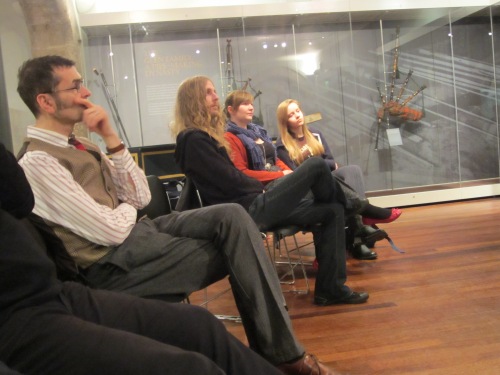 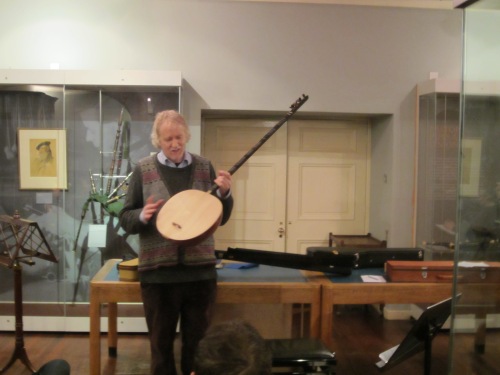 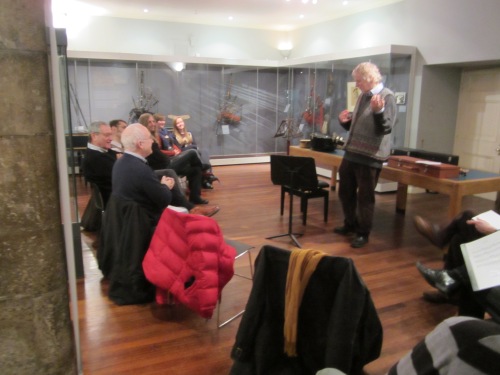