Wow – our biggest turnout, about 20 people, not all of whom came to play. Double-edged sword this one. On the one hand, it was a great event, with lots of smiles all round. On the other, there were some regulars who shied away from playing in front of a ‘crowd’. I know 20 is not a lot, but it did feel a bit more like a concert situation. I’d be interested in reading comments from regulars about this. I enjoyed it myself, but it is how the regular members feel that is of greater importance. Let me know.

The playing lasted for an hour, but the socialising afterwards went on almost twice as long, and seemed to be a wonderful experience for many of us.

[All photos, either Bill Samson or Rob MacKillop]

Rob was playing a guitar by the Canadian luthier, Scot Tremblay, based on a Stauffer in the Edinburgh University collection, which Rob later pointed out to the audience. The guitar arrived 24 hours earlier, so the (rather handsome) performer had little time to get used to it. Nor did the ensemble have more than five minutes to meet, greet and rehearse, before coming out to play. The ensemble balance was apparently good, and the performers seemed to enjoy the moment. We hope to hear more from them at a future SLEGS meeting, hopefully with more rehearsal time under their belts. The song by Diabelli certainly deserves to be heard again.

Rob MacKillop then talked about this new guitar, and played two studies by Coste [Opus 38, 3 in Dm and 4 in D] utilising the 7th string. Although the guitar was being played for pretty much the first time, it gave a good impression of what is to come, once it and its player become better acquainted.

James Jackson played his own arrangement of ‘It’s A Wonder To See’ from the Straloch manuscript, followed by (Balcarres 83) a Sarabande by Mercure. Both sounded beautiful on the large 12c, on loan from The Lute Society. Good to see James performing confidently in front of an audience.

Bill Samson and Stuart Mcluckie, a new and unrehearsed lute duo, gave a very good rendition of variations on Greensleeves from the Folger manuscript. They both produced glowing tones from their 7c and 8c lutes – a Bill Samson home-mader, and a James Marriage. No one would guess they had not rehearsed this piece for hours on end. Really, it was very good, and I hope we can hear more from them at a future meeting.

Chris Jupp played three pieces by Newsidler,  from Ein neugeordnet kuenstlich Lautenbuch (roughly translatable as ‘ An artful, newly ordered lute book’ (1536) 1. Wol kumpt der Mai (may is on its way), Ein guts Hoffententzlein (a good little courtly dance) paired with Der Hupf auf (which means hop on or perhaps hop along). Chris seems to have adopted a more relaxed playing posture than on previous occasions, as well as playing closer to the bridge with his right hand. He got a good tone from his Early Music Shop lute, but his playing is now demanding a professional instrument. Start saving, Chris. You deserve it.

Chris Despopoulos flew all the way from the West Coast of the USA just to be with us (not 100 per cent true). Chris was in good cheer, seemed to be in his element, and treated us to some wonderful mandore playing from the Chancy manuscript, using a feather quill. I always love hearing the mandore, and watching the audience’s delight and wonder that such a small instrument could fill a room with sweet music. Chris should still be around for the next meeting, so we look forward to hearing some more from his ‘travel lute’. 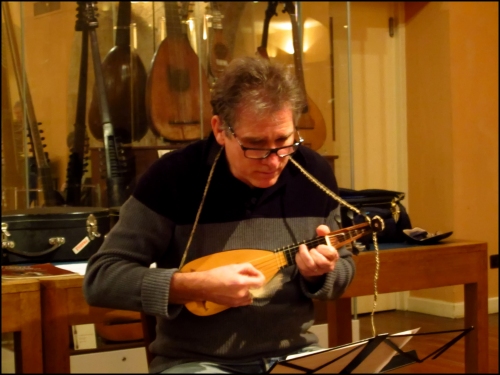 Another duo, David Bateman and friend (whose name I didn’t catch – sorry) played an Anon-Matelart Recercata, ‘La Terza’, with David on a modern 11-string guitar, and his partner on a 7c (?) lute. It is hoped that David will soon find a lute or historical guitar – that is what SLEGS is all about, after all. Sadly his guitar was almost twice as loud as the lute. Still, they gave a pleasant two minutes. In the absence of a Classical Guitar Society in Edinburgh, David is welcome. He is at least reading lute tablature and also learning to read from a figured bass. I look forward to the day when he performs some Austrian music on his 13-string Schrammel guitar… 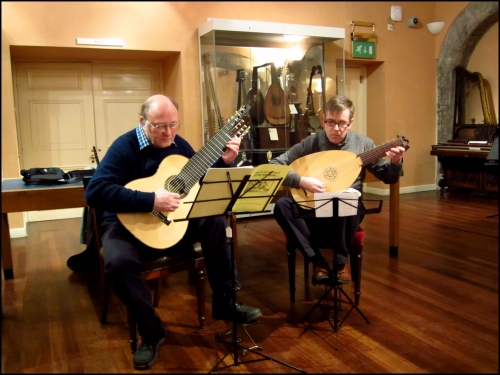 Next up was PhD student, Jonathan Santa Maria Bouquet, who gave a short presentation of his self-made Rauwolf lute. Jonathan will making a series of lutes based on the Fugger inventory. His first lute looked well made, and a queue of potential borrowers appeared in his wake! Rob MacKillop played a beautiful Scottish air on it. Now, Jonathan, you have three months to make another for the next meeting! 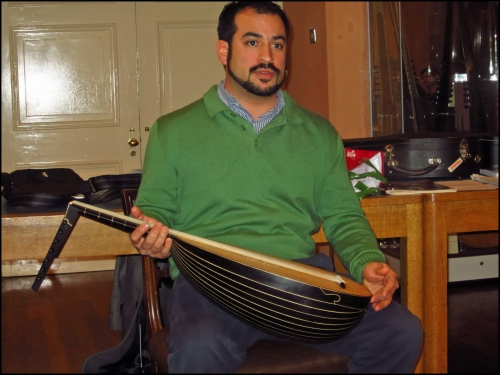 Rob MacKillop rounded of the playing hour with a presentation on the 18th-century wire-strung ‘guittar‘. The instrument collection in St Cecilia’s Hall includes some fine specimens of guittar, and Rob’s certainly looks the most beat-up, but oft-played of them all. The sound is magnificent, the warm glow of the rose-brass strings surrounding each note. Why these guittars are scarcely played today is a mystery. Rob talked about Robert Bremner and James Oswald, both big names in the guittar world, and who both used to perform in the very same room of the talk.

Then the talking, socialising, breaking off into huddles, started. This seems to be an important part of these meetings, and long may it continue to be so.

Before we get to the photos, how about a little Caption Competition? 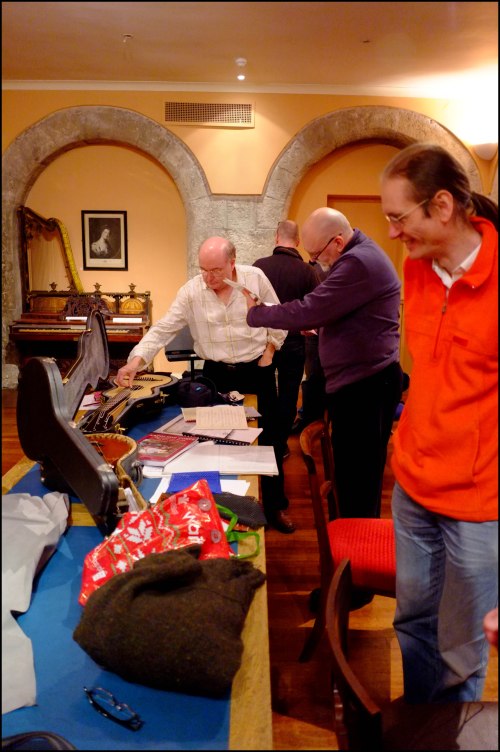 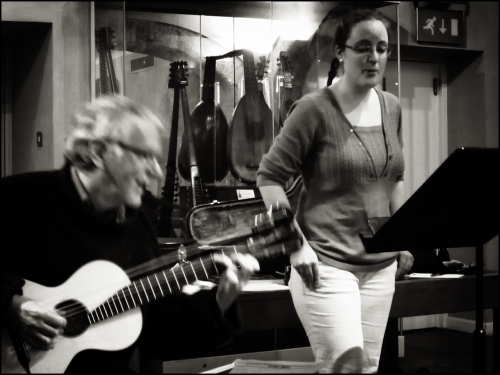 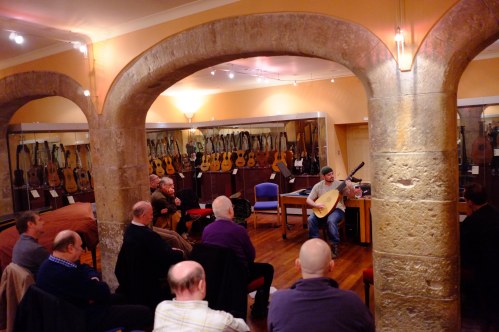 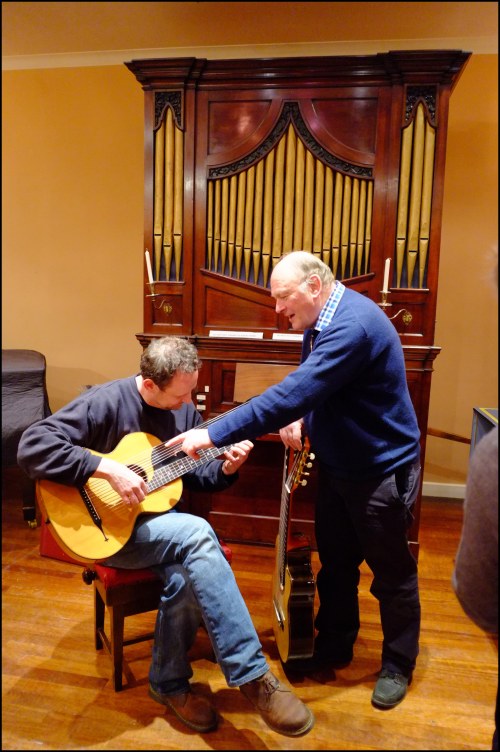 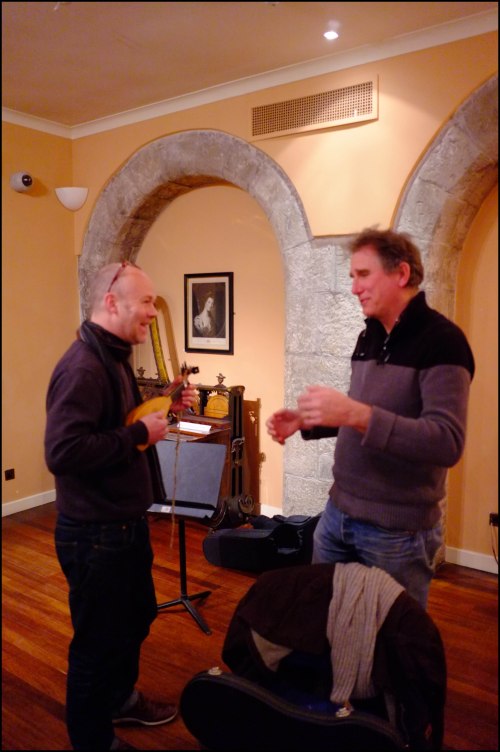 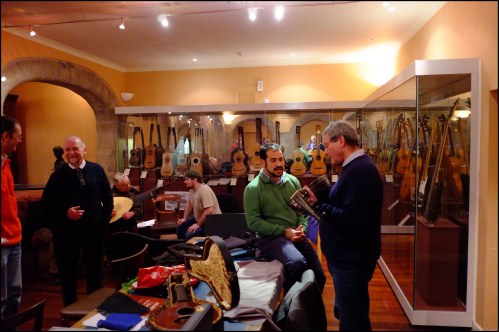 Many thanks to St Cecilia’s Hall for allowing us access to the magnificent Laigh Room. A more suitable venue could not be imagined!

NEXT MEETING – Date to be confirmed…watch this space.